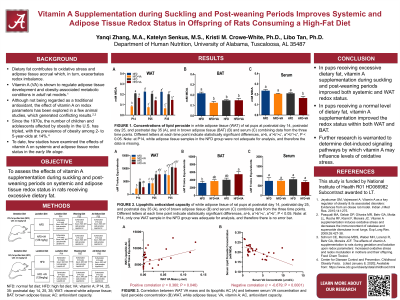 Objectives: Dietary fat can contribute to oxidative stress and adipose tissue (AT) accrual which exacerbates redox imbalance. Vitamin A (VA) has been shown to regulate AT development and associated metabolic conditions in adult models; however, such effects of VA in early life stages, especially on redox status, has barely been studied. The aim of this study was to assess the effects of VA supplementation during suckling and post-weaning periods on systemic and AT redox status in rats reared by mothers consuming a high-fat diet (HFD).

Methods: Sprague-Dawley rats arrived on their second day of gestation and were randomized to either a normal-fat diet (NFD=25% fat) or a HFD (50% fat) both with adequate VA at 2.6 mg/kg. Upon delivery of pups, half of rat mothers from the NFD cohort or HFD cohort were switched to a NFD or a HFD both with supplemented VA at 129 mg/kg (NFD+VA and HFD+VA group), respectively. The other half of mothers remained on their diets with adequate VA (NFD and HFD group). At postnatal day 14 (P14), P25, and P35, pups (n=4 or 3/group/time point) were euthanized. Concentrations of VA, lipid peroxides, and antioxidant capacity (AC) of serum, visceral white AT (WAT) and brown AT (BAT) were measured.