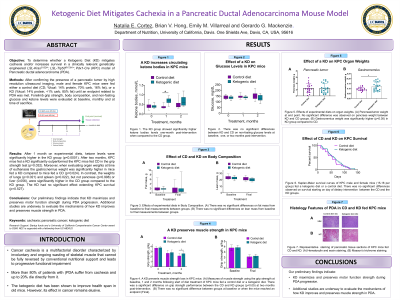 Objectives: Cancer cachexia is a multifactorial disorder characterized by involuntary and ongoing wasting of skeletal muscle. More than 80% of patients with pancreatic ductal adenocarcinoma (PDA) suffer from cachexia and up to 20% die directly from it. The ketogenic diet (KD) has been shown to improve health span in old mice. However, its effect in cancer remains elusive. Therefore, our objective was to determine whether a KD mitigates cachexia and/or increases survival in a clinically relevant genetically-engineered LSL-KrasG12D/+; LSL-Trp53R172H/+; Pdx1-Cre (KPC) model of PDA.

Methods: After confirming the presence of a pancreatic tumor by high resolution ultrasound imaging, male and female KPC mice were fed either a control diet (CD; %kcal: 14% protein, 70% carb, 16% fat), or a KD (%kcal: 14% protein, < 1% carb, 85% fat) until an endpoint related to PDA was met. Forelimb grip strength, body composition, and non-fasting glucose and ketone levels were evaluated at baseline, monthly and at time of euthanasia.

Funding Sources: Startup funds and a University of California Comprehensive Cancer Center award to GGM. NEC is supported with a fellowship from UC-MEXUS