Topical Area: Neuroscience/Nutrition and the Brain 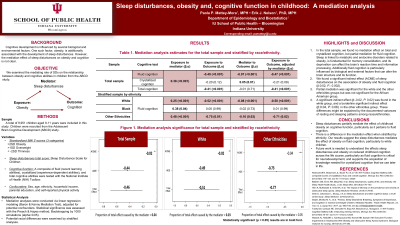 Objectives: Childhood cognitive development is influenced by biological and environmental factors. One such factor, obesity, impairs cognitive development and is associated with sleep disturbances (SDs). We examined the mediating role of SDs on the relationship between obesity and cognitive function in children from a large longitudinal study.

Methods: A total of 9,951 children aged 9-11 years were included in this study. Children were recruited from 21 centers across the US from the Adolescent Brain Cognitive Development (ABCD) study. We assessed cognitive development using metrics for fluid (adaptation and new learning abilities), crystallized (experience-dependent abilities), and total cognitive function. Mediation analyses were conducted via linear regression modeling, with adjustment for potential confounders (sex, age, ethnicity, household income, parental education, and self-reported physical activity) for each of the 3 cognitive outcomes. Mediation significance was determined by bootstrapping. We also stratified our analyses by race (Caucasian, African-American, other racial minorities) to examine potential racial differences.

Conclusions: Our results suggest that SDs mediates the effect of obesity on cognitive functioning in children and that these effects vary across races, particularly as it pertains to fluid cognition. Fluid cognition is critical in childhood neurodevelopment, and further research is needed to address its long-term effects across the life course.

Funding Sources: None to declare